“Mr Juicy” Gino Gambino is best known for his work with Melbourne City Wrestling (MCW) where he is a 2 x MCW World Heavyweight Champion. Outside of Australia, it’s Gino’s allegiance to Bullet Club that put him on the worldwide map as he became the first Australian to join the iconic stable. Through his relationship with the Bullet Club he has even competed in the Tokyo Dome, as he took part in the New Japan Rumble during Wrestle Kingdom 12. It has been announced that Gino will be flexing another wrestling muscle, as he is set to join NJPW commentary for their upcoming Road to Dontaku tour. As our wrestler of the week Gino answered some questions for us! 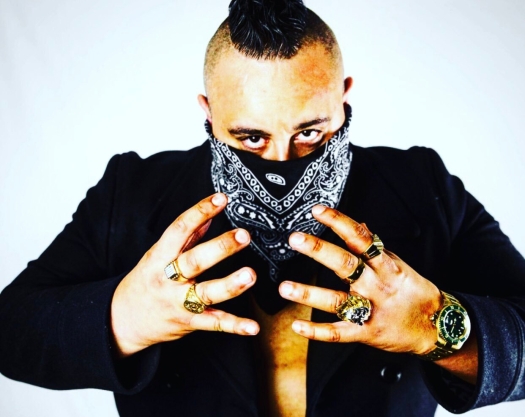 What match of yours would you recommend to somebody who hasn’t seen you wrestle before?
Gambino vs Will Ospreay and Gambino vs Slex

Why wrestling?
Just always loved it, always want to be in a wrestling ring.

How do you feel about the current Bullet Club with Jay White as the leader?
He is the future, the man to lead us all the way.

What is the most embarrassing moment to happen in the ring to you?
Once the sock I wear down my tights to make me look “bigger” popped out and landed in a girls lap in the front row.

Who is your favourite wrestler to be in the ring with?
Jonah Rock

What is your least favourite move to take?
Chokeslam

What would you change about wrestling if you could?
Make wrestling in Australia as hot as it deserves to be.

What/where is the weirdest place you’ve wrestled?
I once wrestled in the back of a moving truck.

If you could challenge for any Championship in the world, what would it be?
NWA 10 Pounds of Gold

Can we expect to see you in a NJPW ring again soon?
Fingers crossed.

If every time you walked into a room 1 song had to play, what would it be?
Anything by Notorious B.I.G.

Who is the best wrestler of all time in your eyes?
Of all time? Has to be Hogan!

You can pick any superhero or villain to become your tag team partner, who do you pick?
Thanos! I mean come on, it’s Thanos!

NJPW have just announced they will be returning for shows in Australia, with the first announced show in Melbourne on June 29th and details of a second event in Sydney being revealed soon. Gambino competed for NJPW during their last Australian shows so this will likely be a good opportunity for him to once again step foot in a NJPW ring.