Shazam! manages the remarkable feat of successfully offering something fresh and different to the very populated superhero genre. It’s an incredibly easy to love film thanks to the well crafted cast; it’s heaps of fun with a lot of great comedy and at it’s core there is a surprisingly deep story being told, all combining to give the DCEU their best film yet. Step aside Aquaman, Superman and Batman, there just might be a new DC fan favourite, and his name doesn’t end in man.

The biggest strength Shazam! has is the cast. The story follows the orphaned Billy Batson (who becomes Shazam) living with a foster family that gives the film it’s uniqueness. Shazam! deserves huge credit for the diversity in the family that was not used as a selling point for the film. Including Billy, there are 6 brothers and sisters, with the highlight being the incessantly adorable younger sister who garnered audible “aww”s from the audience on multiple occasions. This is a superhero film that really focuses on the family aspect like none have before it. Mark Strong as the villain does a respectable job given the limitations his character provides and the amount of content that needs to go into a superhero origin story. His villain has an awfully shocking moment that would fit into many horror films that took me completely by surprise. Zachary Levi’s performance perfectly answers the question, “What would a 14 year old do if he had superpowers?”. 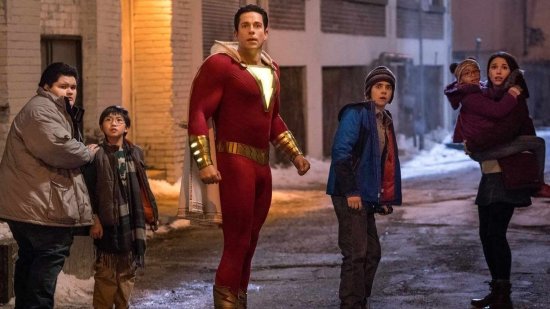 Rather than making nods or having Easter eggs related to other superheroes like we have grown accustomed to over the years, Shazam! fully embraces the world it is in and it works perfectly. In a world in which Superman and Batman exist, of course kids are going to be playing with Superman action figures or wearing a Batman shirt. This take on the hero world is just another small part of what makes Shazam! special. The thought put into the film really shows. Another string in the films bow is that it exists entirely on it’s own. Yes, there are references to the larger DC world, but at no point is it trying to build an entire cinematic universe or over-arching narrative and as a result it can really focus on the story being told.

Perhaps saying so is to discredit DC, but Shazam! feels like it would easily fit into what we have grown to expect from Marvel Studios. I cannot recommend Shazam! highly enough. It was a joy to watch and I hope we see more like this from DC.