The Co-directors and co-writers of Captain Marvel, Anna Boden and Ryan Fleck, were guests on The Empire Film Podcast as part of the spoiler special episode this week. The pair were given the luxury of discussing things they previously couldn’t, including plans for a different end credits scene that would have links to Thor: Ragnarok, the use of the Tesseract, Carol Danvers never being called Captain Marvel, the Avengers Initiative and a whole lot more. 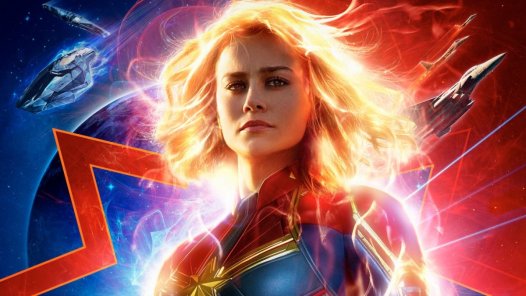 The Avengers Initiative
The whole movie is about Captain Marvel inspiring Nick Fury to change his whole outlook and to make SHIELD now a place that can deal with an entirely unexpected world that he didn’t know existed before. So in a way the whole movie is about how Captain Marvel inspires him to form the Avengers. So we just wanted to make it very specific at the end. But it was a very late decision to not actually see it on the screen. We did shoot him actually writing the Avenger Initiative on the screen and it just felt like we didn’t need to see it.

Setting it before the MCU began
It’s an origin story for the whole thing. That’s something that Kevin Feige and the Marvel team said, we want her to be inspiring Nick Fury to create the Avengers by the end of this movie.

The use of No Doubt’s Just A Girl towards the end of the film
That is actually one of the places in the movie where we tried about 3000 different songs before we arrived on just a girl. Which is hilarious ‘cos just a girl is just the most obvious choice. But for a variety of reasons we were kind of looking in a different direction before we landed there and then we put it in and there’s something a little bit cheeky about it, a little bit fun about it. People were really into it, really fell in love with the use of it. Is it too obvious, that’s the question. There’s a little wink to the audience in there. It’s playful.

Alternate end credits idea involving Thor: Ragnarok
There was an idea on the table about having Jude Law, you know how she (Carol) sends him off at the end of the movie, emerge from his pod on Sakaar. Similar to Thor: Ragnarok. And then have him look around and see the devil’s anus behind him and wonder “where the hell am I?”

Goose being a flerken
It was one of the very very first ideas. That was definitely one of the very top things we always wanted to see in the movie. It’s so awesome in the comics. I mean a cat, who’s a flerken, who has pocket dimensions. There’s no way that wasn’t going to end up in this movie. Maybe if there was a spinoff, we go inside the the flerken. What if Talos got sucked in and you could spend time with a flerken and Talos. In the comics it’s Rocket who’s scared of the flerken, and we didn’t have Rocket in this movie. But we just thought it would be so funny for Talos, who’s like our villain, he’s threatening this whole group of people and then he sees this little, cute, adorable cat and it scares the living bejebus out of him. It’s also funny too because Ben Mendelsohn loves cats.

Original opening to the script
The original opening to the script was her in a simulated combat situation, in her fighter jets, where they’re doing an exercise. And basically it was a whole Top Gun style sequence that we were even planning to shoot for a while. Even though it was great and an awesome introduction to Carol and her human character and to Maria Rambeau as well and I think it would have been fun for the audience to meet them on earth as humans. But the problem with that is that the audience would be so far ahead of the story.

Talos – Ben Mendelsohn
When we first had the idea to cast him in the movie we knew he would be paying 2 parts. And so we wanted him to play the human he is inhabiting, Agent Keller, with an American accent, the SHIELD agent. And then just to differentiate from that accent we wanted him to lean into his natural Australian accent, which sounds amazing with all the makeup on him.

Not referring to Carol as Captain Marvel
I don’t think we set out to not call her Captain Marvel in the movie. She had to come up with the name at some point by the end of the film, we thought Nick Fury at the sink doing the Marvelettes song, just a little kind of tease as to what’s to come and why her name is what is is. And of course there’s Marr-Vell so she’s taking the mantle from her hero. But of course Nick Fury changes the pronunciation. Then you see at the end that she was Captain Carol Danvers when he has her file at the very end. It’s there, if you want it, it’s there.

It was almost The Mask in Blockbuster instead of Arnold Schwarzenegger & True Lies
Of course she has to blow somebody’s head off on that standee, it’s going to be Arnold or Jamie Lee Curtis so of course we had to go with Arnold. We really wanted it to be The Mask because of the green head so the idea that she thinks it’s a Skrull. We initially tried to get that but they wouldn’t clear it. I think that studio was uneasy with us blowing up their standee. And to Arnold’s credit he was a good sport, he signed off on allowing us to do that.

The Tesseract
You knew that something needed to give Carol her powers. We were at a point when we were brainstorming with the team at Marvel and just like, why create a whole new thing. We have all this power stuff that’s already in the Marvel universe, do we really need to create a whole new energy source for her to gain her powers when we have some to choose from. So we decided to go with the Tesseract. Nobody liked saying Psyche-Magnitron. That’s from her origin story in the comics.

The podcast also dives into more of the intricacies of the film including discussion on feminism being shown throughout the film, the abusive relationship between Carol and Jude Law’s character, and the clear relation between the real world refugee crisis and the Skrulls.