The illustrious New Japan Cup kicks off at the famous Korakuen Hall in just 3 weeks and will be the first of 12 shows taking place from 8th – 24th March. The NJCup is a single-elimination tournament which will see the winner challenge Switchblade Jay White for the IWGP Heavyweight Championship at Madison Square Garden on April 6th. Only one entrant is confirmed for the event so far, a man who’s future with New Japan is no-longer in doubt, the Golden Star Kota Ibushi. We can expect the other 15 entrants to be announced soon, but that won’t stop me speculating for now! Here’s who I’d like to see in the Cup and what I think of the story they could have with Jay White: 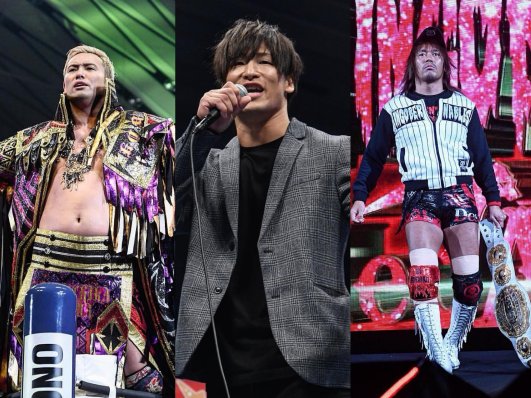 Tetsuya Naito
Naito is currently the IWGP Intercontinental Champion and has made his ambitions clear as he wants to be the first man in history to hold both the IWGP Intercontinental Championship and the IWGP Heavyweight Championship. Historically, the Intercontinental Champion would not be a participant in the NJCup, as previously the winner has been able to challenge for that title if they wished. It will be interesting to see if the New Japan office are willing to make an exception this year, and if they do how Naito will fare in the tournament. Should he lose during the Cup, he will no doubt have to defend his current title against whoever defeated him. It seems as though the Stardust Genius is willing to risk what he currently holds to make his dreams a reality. Naito won the tournament in 2016 and went on to defeat then champion Kazuchika Okada to become the IWGP Heavyweight Champion for the first time in his career.
Tetsuya Naito vs Jay White
A Naito vs White match could have the perfect story. White is almost terrorizing New Japan with his reinvigorated Bullet Club and he has now laid waste to the Ace, Tanahashi. So what if the person that New Japan and the fans need to stop White is their failed Ace…A man who the company seemingly gave up on until he ventured to Mexico to reinvent himself and become the leader of Los Ingobernables de Japon… A man who no longer cares for NJPW but became a fan favourite. What if Naito saved NJPW from Jay White?

Kota Ibushi
Ibushi declaring that he is staying with New Japan is huge news given the current pro-wrestling landscape. He has always been one of NJPW’s top guys but never the top guy, supposedly due to him notoriously being difficult to sign to a contract. Now that he has committed to NJPW it may be rewarded with a victory in the tournament. Backstage politics aside, I feel Ibushi would be a deserved winner of the tournament. When the topic of “best wrestler in the world” comes around, Ibushi is always a solid contender for that spot. With Kenny Omega now out of the picture, perhaps the Golden Star can finally shine like he should. Ibushi won the tournament in 2015 but was unsuccessful in challenging then champion AJ Styles.
Kota Ibushi vs Jay White
Ibushi has made it very clear that he sees Tanahashi as his wrestling God. At The New Beginning, Ibushi would have seen his God struck down by the devilish Switchblade and now Ibushi has the opportunity to make White pay for his transgressions.

Kazuchika Okada
Okada had perhaps the craziest 2018 of any wrestler but the balloon wielding, red-haired, trousers wearing Okada of 2018 is no more and  The Rainmaker is back with something to prove! With a win over Bad Luck Fale at The New Beginning, Okada is looking to get back into the title picture that has forgotten all about him. Okada has not competed in a NJCup since 2015 which saw him be knocked out in the first round but he knows what it takes to rise to the top as he won the Cup in 2013 and went on to defeat Hiroshi Tanahashi for the Championship.
Kazuchika Okada vs Jay White
The story here tells itself. Okada was defeated at Wrestle Kingdom 13 by White and would love nothing more than to defeat the smug Bullet Club leader and in turn return to his spot at the top of New Japan. If he can get his hands on  Gedo along the way, then that just makes it even sweeter for him.

Other Entrants
Hiroshi Tanahashi – If his body allows him, I’m sure the Ace will make a return during the tournament to try redeem himself after his defeat to Jay White. Although Tanahashi has nothing to prove to the wrestling world, it’s hard to imagine he is anything but pissed for losing the IWGP Heavyweight Championship during his first defense.
Zack Sabre Jr – The winner of last years NJCup is a perfect addition to any tournament. ZSJ’s wrestling style is perfect for tournament competition as victory can come from any of the seemingly infinite submissions the Technical Wizard can apply. Admittedly though, a Jay White versus ZSJ match doesn’t scream main event to me from a story standpoint.
Minoru Suzuki – At 50 years old,  Suzuki is still one of the biggest forces in wrestling all over the world. It’s hard to argue against Suzuki winning the tournament and a match with Jay White could be a tasty recipe. When the young and cocky White met the truly evil Suzuki in the G1 Climax, Suzuki was victorious.
Tomhiro Ishii – The Stone Pitbull has always flirted with the main event scene. Rarely does he get the spotlight, such as his title challenge vs Kenny Omega. Perhaps it’s time the light is kept on this incredible workhorse. Ishii is one of the most consistent wrestlers in the world at delivering high-caliber matches and is always an MVP of any card he competes on. His no-nonsense style would be parallel to Jay White’s more intellectual approach to business in the ring.
Will Ospreay – Could we see the Aerial Assassin make the jump from Junior to Heavyweight for this tournament? Ospreay has proved he belongs with his landmark win over Ibushi for the Neverweight Championship at Wrestle Kingdom 13. Throwing Ospreay into the mix could lead to a world of unique matches. With the departure of Kushida, I think Ospreay is needed with the Junior division, but that doesn’t mean he can’t compete in this tournament to help lend to his credibility. Any match Will Ospreay competes in is exciting, so a match versus White would be no different.

This is just a small idea of what we could be in store for with the New Japan Cup and Jay White’s first title defense. Personally, I’d love to see a Suzuki win. The joy of loving New Japan is that no matter who wins, the matches themselves will be some of the best you can see today. I have very rarely come away from any New Japan show disappointed.