When the announcement of a solo Venom film that would not include Spider-Man was made, fans were understandably disillusioned. Venom would finally be getting the spotlight that many believe he deserves in this age of comicbook films, but how do you do the character justice without including the distinguished hero he is intrinsically connected to? Ever since Venom was dealt with ungracefully in 2007’s Spider-Man 3, fans have been yearning for the iconic villain to be championed correctly on the big screen. Does this film do the beloved character justice? Sometimes. By far, the most alluring aspect of the film is (thankfully) Venom, but it is tarnished by the rest of the film being terrible to mediocre at best. 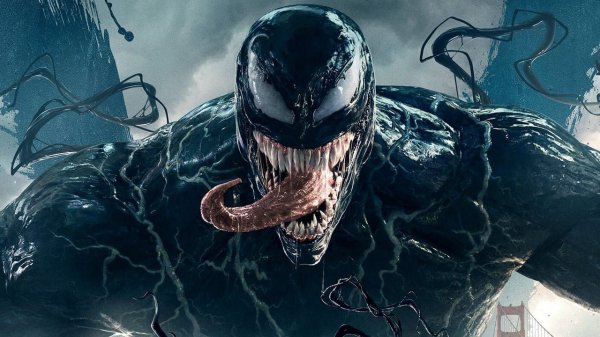 An incredible dull and tedious first act almost dooms the film before it can really get going, shorten the first act (massively) and this film may be seen in a better light. Business immediately picks up once Venom and Eddie Brock meet for the first time. The relationship between the pair is where the film shines brightest; in a film that will be forgotten among the many superhero related films, Tom Hardy’s performance as Eddie is one aspect that does more than enough to keep you intrigued and arguably achieves the most important job of making you want to see more of him and Venom. Now that the origin story is out of the way, hopefully future installments will see the bizarre pairing given a better plot and script that can truly allow Venom to make a mark in this comicbook-cinema-world we now live in.

The action is that of a typical Hollywood film, lots of visuals with little substance including the final showdown that takes place in the dark, constructed with quick cuts that make it hard to follow. The entire supporting cast is also entirely dismissive, with the characters feeling like that have no real necessity to the film. The comedy misses the point more often than it lands, which it only does on a few occasions. But for all the mismatched comedy and action, the film is mostly fun. This fun is purely thanks to the almost bromance of Venom and Eddie Brock.

The film is having a very mixed early reception, and rightly so. This is by no means a great comicbook film, superhero film or film in general but it’s definitely not all bad. You need to make your own opinion on this one (like you always should). The groundwork is firmly laid down for Sony’s ambitious prospects of a movie universe based on Spider-Man, but the next installments in the franchise will need a drastic improvement to compete.

Oh, and make sure you stay around for the mid-credits scene.