How do you possibly begin to plan the most ambitious film crossover in history? With a huge whiteboard apparently. Anthony and Joe, The Russo Brothers, were guests on the The Empire Podcast in April, shortly before the release of Avengers Infinity War, and they discussed how they started the process. They also talk about the character of Thanos, explaining that he is the main character of the film. Have a look below at what the directors of the biggest film of all time had to say. 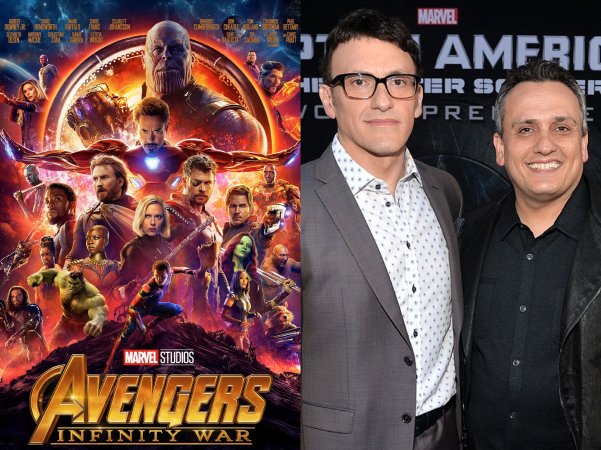 How The Process Started
We would sit in a room, we have a magnetic whiteboard with every character in the Marvel Universe on it and we would just start talking. It’s me (Joe), Anthony (Russo), (Christopher) Markus & (Stephen) McFeely, and we’d spend months in a room writing ideas under each character; where they could go; what we want them to do; what we wanna’ see happen to them; what we think would be interesting or surprising; where they are at this point in the Marvel Universe; and where we want them to go after this. We talk about the villain and we talk about the agenda and then you start lining up all those things slowly and coalescing that into a plot. And then we would write cards out for the plot so each scene would be a card and we’d put that up on the board then we’d spend 2-3 months going through the cards looking at the structure; is that the correct scene?; can we do a better scene?; is that leading to the ending correctly?; and once we’re done with that, so we’re about 5 or 6 months into the process, it’s ready for a script to be written. I think we knew the end to both A3 and A4 pretty early on. We came up with the idea of what we wanted to do and ran at it.

The Character of Thanos
We knew fairly early on he would be the main character. What can you bring to the table that’s different? How are you going to surprise the audience? Not only do we have to worry about what was done in the last Marvel film we have to worry about what was done in Deadpool and what was done in DC movies. You’re looking for fertile ground to tell a story. Something that we hadn’t seen on this large of a scale before was a commercial film told from the point of view of a villain. We also knew we needed to introduce him correctly into the universe, he hadn’t had a lot of screen time. The real estate’s precious in a movie with 22 heroes in it. We felt like if we ascribed a lot of that real estate to him, then the audience is going to understand it better, they’re going to understand what he wants better. Weirdly, you’ll have moments where you empathize him and other moments where you’re going to despise him. Having grown up on Star Wars, Darth Vader was always the preeminent villain. He’s complex because he’s a tragic character. So in that regard, I think Thanos is an equally tragic character. He’s got a much more vicious agenda than even Vader had. He’s like the Genghis Khan of this universe; he’s highly trained; he’s fought for a millennium; he’s conquered planets; he’s fought everyone he can think of; he’s stronger than the Hulk; his skin is nearly invincible; he’s this sort of perfect genetic mutation. He’s this perfect storm of intelligence and physicality married to a sociopathic agenda.