What Webbed Watched is a weekly segment in which the contributors to Webbed Media give a brief review of any film they have watched in the past week. The film may be a brand new release, a classic, a film we regret watching or one we’ve seen a hundred times. This week we have Upgrade, What We Do In The Shadows and A Quiet Place. 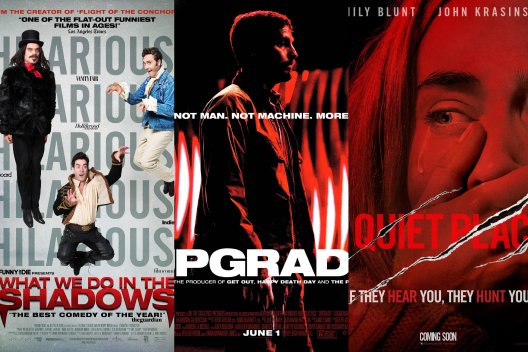 Upgrade – @Davemanson1
Blumhouse Productions deliver again with this dark sci-fi thriller. Logan Marshall-Green (The first Shocker in Spiderman: Homecoming) plays Grey Trace, a mechanic who is left quadriplegic following an attack on him and his wife by technologically enhanced criminals; upgrades. Trace is then ironically enhanced with a spinal implant called STEM, which not only allows him to walk again, but grants him super-human speed and agility. This film is really a hybrid in the sci-fi genre, representing 50% Robocop, 30% Death Wish and 20% Ex Machina; and if that isn’t enough to spark your interest, it has its fair share of impalings and mutilations. Leigh Whannell, the genius behind the Saw and Insidious film franchises, directs Upgrade, and the similarities, especially in terms of brutality, are potent. Upgrade contains everything you could hope for – a sci-fi future, enhanced humans, gore and revenge. If you can overlook the slightly unconvincing main antagonist, and the fact that Grey’s wife Melanie Vallejo will constantly evoke thoughts of the Blue Ranger in Power Ranger Mystic Force (No? Just me), then I would highly recommend Upgrade. Look out for Betty Gabriel who plays the creepy housekeeper in Get Out.

What We Do In The Shadows – @CiaranRH
Hunt for the Wilderpeople is one of my all time favourite films and I love Thor Ragnarok so it comes as no surprise that I was thrilled by director Taika Waititi‘s 2014 outing, What We Do In The Shadows. The movie is a mockumentary about a group of vampires who live together in New Zealand and sees the documentary team follow the vampires on their daily lives. The genius in this film is the humor implored through vampire lore; they cannot go into the sunlight; they have to drink blood to survive; they have no reflection in a mirror; they can only enter places they are invited in to. For a group who enjoys nightlife and partying, it can be difficult to get into a club when the bouncer won’t invite you in. The relationship between the 3 main vampires, including Taika in an acting role as Viago, is perhaps the highlight of the film. The 3 are essentially a family and like any family, they love each other but also fight. All of Taika Waititi’s film have a very distinct feel and humor with What We Do In The Shadows fitting the style perfectly.

A Quiet Place – @MoMoBeena
Imagine having to play a life-long game of who can stay silent the longest. Except whoever breaks their silence first, gets hunted down, murdered and/or eaten alive! John Krasinski has managed to create a gut-wrenching, heart palpitation inducing horror/thriller which really does toy with your emotions. The literal silence throughout 98% of the movie is something of shock and awe, and very successfully executed. Not much to say on the script front considering there was barely any talking throughout the movie. Yet it proved to be gripping from beginning to end. I can’t say anymore on this without spoiling it, just go watch it immediately!