Chris Charlton‘s name is getting bigger by the day in the wrestling world. For years he has provided translations on Japanese wrestling via his Twitter (@reasonjp), along with intricate story details on matches and feuds to help fans worldwide bypass the language barrier. In 2015 he released his first book, Lion’s Pride: The Turbulent History of New Japan Pro Wrestling. In June 2018 he released his second book, Eggshells: Pro Wrestling in the Tokyo Dome. On 21st July 2018, Chris joined the NJPW commentary team of Kevin Kelly and Rocky Romero for the G1 Climax 28 in Korakuen Hall to a well deserved outpouring of support on social media. Chris would then go on to call a few more nights of the G1 Climax, including the final show in Nippon Budokan a few weeks later. To coincide with our review of the excellent Eggshells which you can read here, Chris was kind enough to answer a few questions about his new book and his time on commentary. 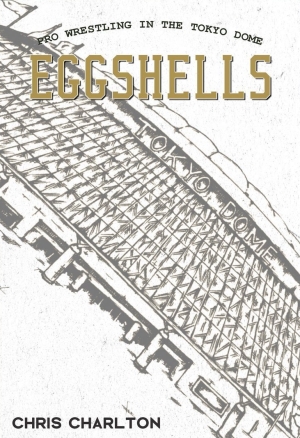 How did the idea for Eggshells come about?
Leading up to Wrestle Kingdom a few years ago, NJPW World put up a playlist of all the January 4 shows. I thought it would be fun to see how much I could watch before WK that year, and in the end I barely got any of it seen. But it planted the seed to research how many other promotions and shows ran there, and from there made me interested in seeking out stories and finding people to interview. Everything snowballed from there.

Do you think we will ever have multiple Dome shows run in a single year again?
Maybe if other promotions ran the Dome. I don’t think NJPW want to run several Tokyo Dome shows in one year, nor should they. I do think we’ll see them do two or three different stadium shows in a year though. Whether that’s bringing Dontaku back to Fukuoka Dome, or Dominion in Osaka Dome sometime, I don’t know.

Do you see any other promotions successfully running the Dome in future years? I know from Eggshells that DDT have aspirations for 2020.
I think DDT could possibly do it with their financial muscle, but they’d have a very different definition of success to NJPW; a five figure crowd would be a very big win for them. It would be great to see several companies at the same top flight level in Japan again, and I’m sure it’s possible, but it’s a long road for a lot of those promotions. 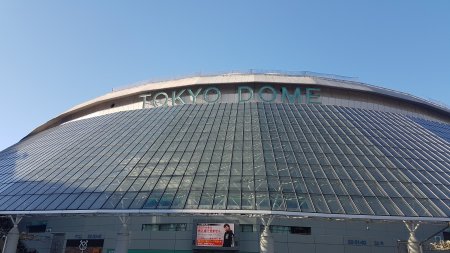 How many wrestling shows have you been to at the Dome? What’s your favourite/most memorable?
I’ve been doing Wrestle Kingdom since 2009, I want to say, so nine shows. I’d go with WK9 as my favourite, not just because of the Nak/Ibushi match, but also the main event, where me and my buddies were cheering on Okada and these very loud guys behind us were behind Tanahashi. We battled back and forth until our throats were raw, and everybody shook hands and hugged afterward. Just a great feeling of community.

Is there a particular Dome show you wish you could have attended?
That first UWFi/NJPW show in 1995. Just the raw passion in that crowd, the partisan nature of it. That must have been tonnes of fun to be part of.

What are your favourite matches to take place at the Tokyo Dome?
Live: Kota Ibushi v Shinsuke Nakamura, WK9. It’s 100 percent the best match I’ve ever seen live, and could well be my favourite match of all time. I hadn’t seen it for a while when I was writing the book and was worried it might not live up to the pedestal I’d put it on, but it’s still perfect. One of those matches that gives you a raw visceral reaction at the time, but that even with distance, you pick up extra details on each rewatch.
Not live: Kensuke Sasaki v Kenta Kobashi in 2005. Such electricity from the very start. Everyone remembers the chops, obviously, but there’s such amazing craftsmanship around that moment. Two of the very best.

Has it sunk in yet that you called commentary for not only NJPW, not only the G1, but the G1 finals?
It was crazy, right? A wild few days. Stressful, but a big learning opportunity and I’m really grateful for it.

How was it doing commentary? Was it difficult to try and enjoy the matches whilst also doing the commentary?
There was a lot more to focus on, certainly, because you’re watching the ring as well as the monitors, and listening to the other two guys while also trying to pick up any chatter in the ring. Rocky and Kevin were just perfect to be with, though. Kevin has a sense for timing and pacing that comes with all the experience he has and was able to use gestures and gently produce on the fly. With those two doing the bulk of the heavy lifting, it felt like just watching the show with a couple of friends.

Was it a relief to see the outpouring of support on social media? There was/is so much positivity surrounding the 3-man booth consisting of yourself, Kevin Kelly & Rocky Romero.
It was surprising, and another thing I’m very grateful for. I’m keenly aware that nothing and nobody is for everyone, but that the reaction was so broadly positive is great. I’m of the opinion that the English announcing on World has been consistently very high quality for a good couple of years now, but I’m glad to hear that the died in the wool JP announce fans are starting to make the switch and being happy that they did so.

Do you have any more wrestling-related plans?
A few different things are in different stages of being made and/or talked about. Most imminently is The Wrestlers on Viceland, which is an amazing documentary series fronted by Damian Abraham that I was delighted to be part of and help out on. I know it’s been sitting finished for a while so hopefully they air it soon.

On a personal level, from the day I started following New Japan, I started following Chris on Twitter. He has supplied me and countless fans with tweets full of information over the years and single-handedly made the Japanese product more accessible to Western fans. Until the recent addition of having translators on the English commentary team, I would always be refreshing my Twitter feed at the end of a show, waiting for Chris’ translations. With his arduous work on Lion’s Pride and now Eggshells, I feel his chance to join the NJPW commentary team was more than deserved and was happy to see him gel so well with Kevin and Rocky. For a company who is taking aim at Western expansion it only makes sense to have Chris join the team, an Englishman who has an encyclopedic knowledge of Japanese wrestling. I hope this is only the beginning for the 3 man team and we see Chris involved with NJPW more and more over the coming months and years.

5 things I want to see happen in NJPW