What Webbed Watched is a weekly segment in which the contributors to Webbed Media give a brief review of any film they have watched in the past week. The film may be a brand new release, a golden classic, a film we regret watching or one we’ve seen a hundred times. This week we have Justice League, Ingrid Goes West and The Blind Side. 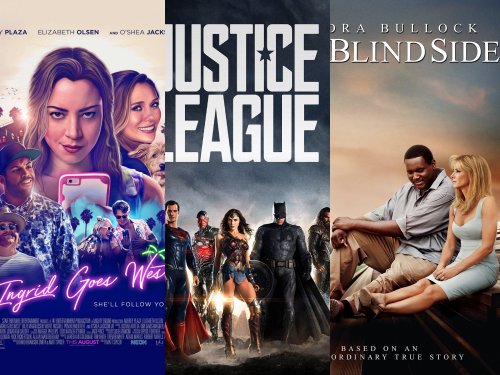 Justice League – @CiaranRH
I think Justice League gets far more hate than it deserves. There are clear issues; a rush from the studio who elected to introduce half of the team via this film instead of with individual movies first; it was always going to be compared to Avengers which it cannot match up to; it falls victim to a forgettable villain in Steppenwolf. But come on, the film is cool! It flourishes when the full Justice League team is in action, most notably when Superman fights the rest of the team. Ezra Miller took me by surprise as I enjoyed his portrayal of The Flash which seemed unattainable given how accustomed I am to Grant Gustin. Jason Momoa is extremely badass as Aquaman. Although Ray Fisher’s Cyborg seems like an afterthought, the potential is there for the future. I think there was an opportunity to make something special here but the studio seemed to get in the way and the changes made by Joss Whedon to make the film more lighthearted are obvious and feel out of place. But it isn’t as bad as the majority of people like to make out, it is a solid superhero film, we just expect higher standards after years of being spoiled by Marvel Studios.

Ingrid Goes West – @Davemanson1
The story of a mentally disturbed and social-media obsessed woman who travels to California following incarceration for stalking and assaulting a young woman in her hometown. Aubrey Plaza plays Ingrid Thorburn and showcases her largely unknown, but fantastic, acting skills. Her obsession, investigation and fabricated friendship with Instagram socialite Elizabeth Olsen paints a sordid picture, but you cannot help root for Ingrid throughout. After the film performed well at Sundance, many tipped Plaza as a potential Oscar nominee, but unfortunately this did not gain any traction. First-time filmmaker Matt Spicer places emphasis on the association between social media and its impact on mental health. Dark, humorous and satirical, Ingrid Goes West really explores the notion that being #popular is not always that good. Marvel fans look out for Scarlet Witch (Elizabeth Olsen) and Mantis (Pom Klementieff).

The Blind Side – @MoMoBeena
Based on the real life story of NFL star Michael Oher, The Blind Side is based on the book sharing the same name, The Blind Side: Evolution of a Game. As an ardent reader of all things literary, it’s a first for me when I say that this movie most certainly did the book justice! It follows the struggles of a homeless teenager that is taken in by a wealthy suburban family, opening up doors to him that he’d never imagined possible. Coupled with his substantially large physique and innate protective instincts, he learns his true potential, going on to become one of the most sought after players in NFL history. If you want a feel-good movie with a little less thinking involved, this is your go to movie for the week. If anything, you can at least sit back and laugh at Sandra Bullock’s god awful Southern American accent.