Hearts Beat Loud is a charming film that will have you smiling at the sweet father-daughter relationship on show between the lead characters Frank Fisher (Nick Offerman) and Sam Fisher (Kiersey Clemons), tapping your feet to the vibrant songs created for the movie and falling in love with the neighborhood and residents of Red Hook in Brooklyn.

The movie has a basic plot, Frank wants to create a band with his daughter, Sam, who is shortly leaving home to study medicine. The chemistry between Offerman and Clemons is wholesome and heartwarming as we see Offerman portray a father who has an overwhelming love for both his daughter and music. The movie is at its best when the pair are performing or making music together, with Clemons showing off her impressive vocals and Offerman’s character admirably proud of his daughter which all adds up to a very uplifting experience.

There is very little conflict throughout which stuck out to me. I have no movie making experience but I imagine it must be an extremely arduous task to have a story with minimal drama but Hearts Beat Loud manages to pull it off and still keep you invested in the characters. The supporting cast consists of Toni Collette, Sasha Lane, Ted Danson and Blyther Danner; all of whom have their own moments throughout the film and add to the quaint Red Hook neighborhood. The scenes between Danson and Offerman offer a lot of surprising wisdom that sticks with you as the story unfolds.

One aspect that deserves recognition is the young relationship between Clemons’ character and her girlfriend Rose, portrayed by Sasha Lane. A point is never made about the pair being a gay couple; it isn’t used as a plot point; it isn’t part of an ulterior motive to make a statement; Offerman as the father treats it like any other relationship because that is exactly what it is. It is a normal, loving relationship that in this instance is between two young women. Seeing the support that Rose shows when she sees the father-daughter duo perform is undeniably adorable.

Behind all the innocent characters and upbeat songs, the film does have it’s emotional moments that will leave many viewers teary-eyed, most notably when Offerman performs Shut Your Eyes. 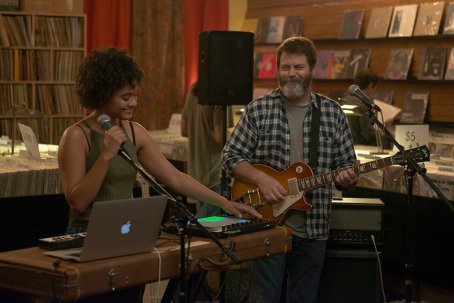 Unfortunately Hearts Beat Loud will likely fly under the radar. I would urge you to take that bit of extra effort to go and see this if it is still being shown near you or view it once it has its home release, it deserves your attention.