At the weekend I was lucky enough to experience the newly opened Mario Kart Arcade GP VR at the Hollywood Bowl located inside The O2, London. It blew my mind. Everybody knows Mario Kart and you’ve more than likely played it in some form, whether it be on Nintendo 64, Nintendo DS or Nintendo Switch, but I promise you that none of those can compare to the thrill of Mario Kart VR. I recently found out that I had walked past Mario Kart VR multiple times on my trip to Tokyo earlier in the year, but now I was getting the chance to fix that mistake and fulfill a lifelong goal I never knew I had; to become Yoshi and actually throw green shells at other real life players. 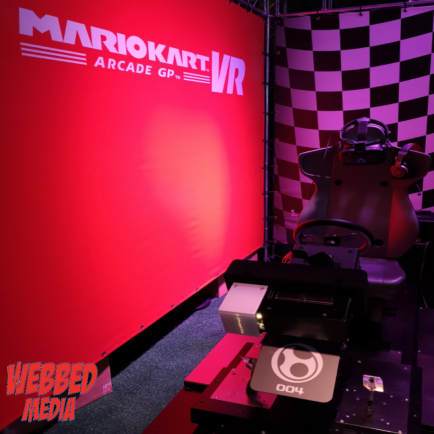 The setup at Hollywood Bowl is for up to 4 players at once, with each kart setup (a seat, 2 pedals and a steering wheel) relating to a pre-selected character; Mario, Luigi, Princess Peach and Yoshi. The kart seats are placed on moving platforms that rumble when you accelerate and shake when you are hit by an item or when you crash into something. The VR headset is a HTC Vive that is accompanied by headphones to fully immerse you in the experience. Lastly you have hand trackers wrapped around your palms which you have to use to grab items. You can’t just drive into boxes to grab items in this game, you have to literally stretch out your hand to grab items that are held by balloons throughout the race course.

Once your all geared up and the game begins you are thrust into the world of Mario Kart. When I looked at my steering wheel, my hands were big and green and I looked all around me to see the other 3 racers and take in the world I had entered. The graphics are incredible and extremely colourful. Whilst waiting for the race to begin, I had a fright when Bowser and Wario came speeding in front of me to start at the front of the queue, they were both huge! It was at that point I discovered that I could hear and speak to the other racers in the game which vastly added to the excitement. The countdown began, we were off and my kart was rumbling beneath me. 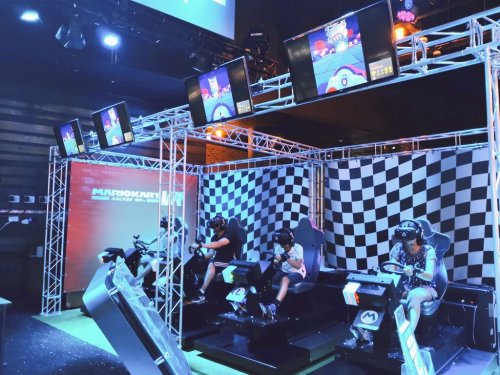 Every time you hit a speed boost or jump, you’re hit by light wind to add to the immersion. The real fun begins once you see the items coming up. The items are limited to green shells, banana skins and a hammer. I reached out from my kart with my right hand, grabbed a green shell and was ready to take down the other racers. With a throw I hurled the shell forward, hit Mario in the back, sped past him and had one of the best gaming experiences of my life. As the race progressed I grabbed a hammer but Princess Peach was just out of my reach, so I leaned forward from my seat, stretched my arm as far as I could and managed to whack her! Throughout the course you have to dodge obstacles including piranha plants and thwomps and very early on you realise that they are immeasurably larger than you are and the need to avoid them seems very real. Of course I won the race. 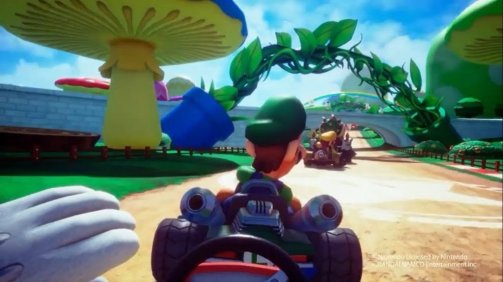 The only downside is that the race goes on for less than 5 minutes and at £7.99 a go (or £24.99 for 4 players at once) you likely won’t want to replay it very often. However everybody should experience Mario Kart VR at least once, whether you are a die hard gamer, a casual fan or a parent who only knows that Mario wears a red cap.